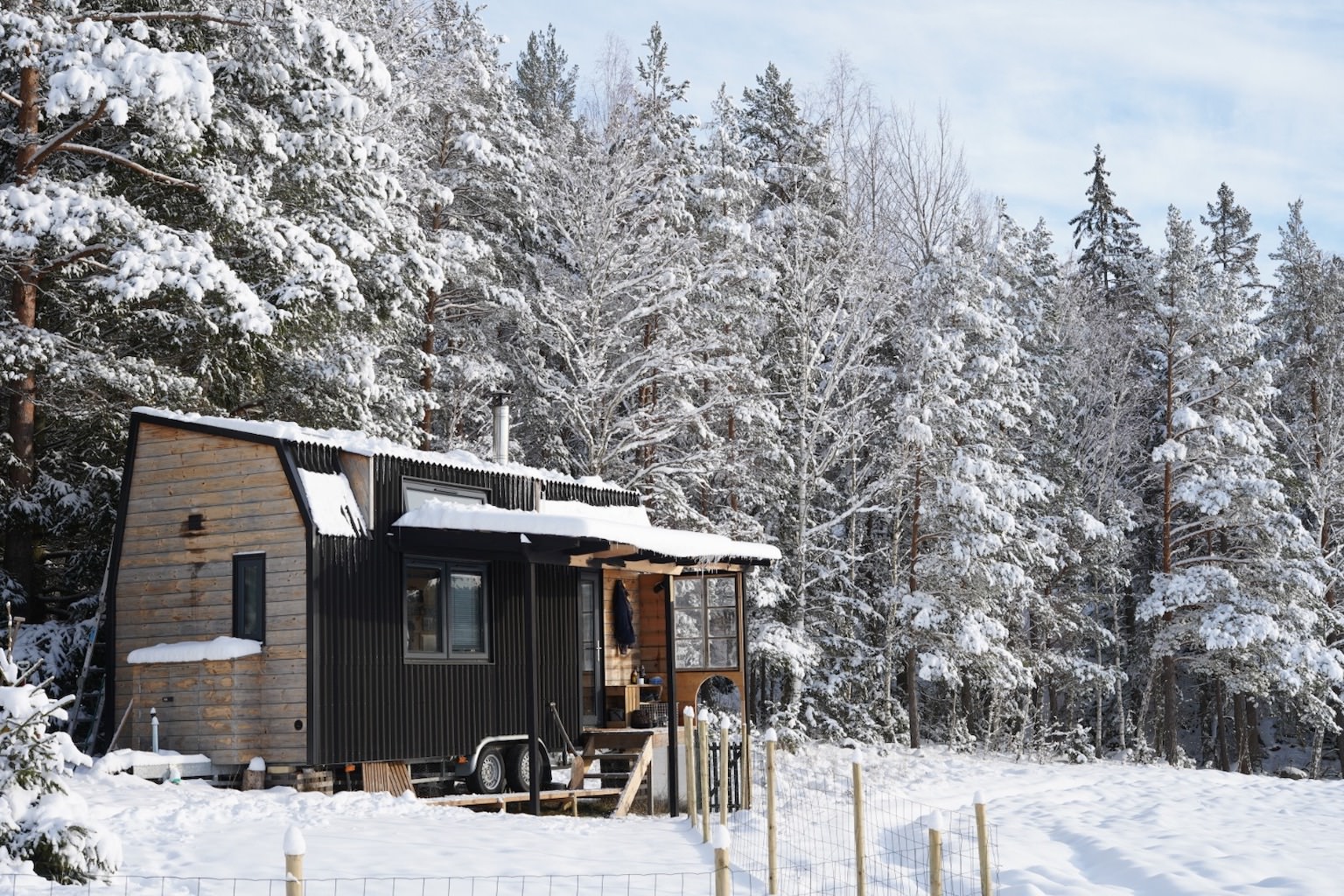 We're now over two years on from the second instalment of the Tiny House project, so it feels like a good time for a revisit. If you remember, the Tiny House was near completion and the plan was for Jas and Freddie to take the long drive north to Sweden, to find a place for their new home.

They'd built the tiny house, working evenings and weekends. It was constructed on a trailer supplied by a Dutch company, designed specifically for tiny house builds. The frame is super light and helps to achieve the maximum towable weight limit of 3,500kg. This little video shows the start of the long journey north. We'll tell you more about this in another post soon.

So, did it work? Did that plan come to fruition?

We caught up with Freddie and Jas in a small hamlet, an hour outside Stockholm, on a normal, Swedish winter day, where the top temperature reaches a heady -8 degrees during the day and having dropped to -17 the night before. Fred was at his desk with his Boxer puppy, Pelly asleep at his feet. It all seemed pretty idyllic to me, zooming from a wet dreich day in the north west of England. 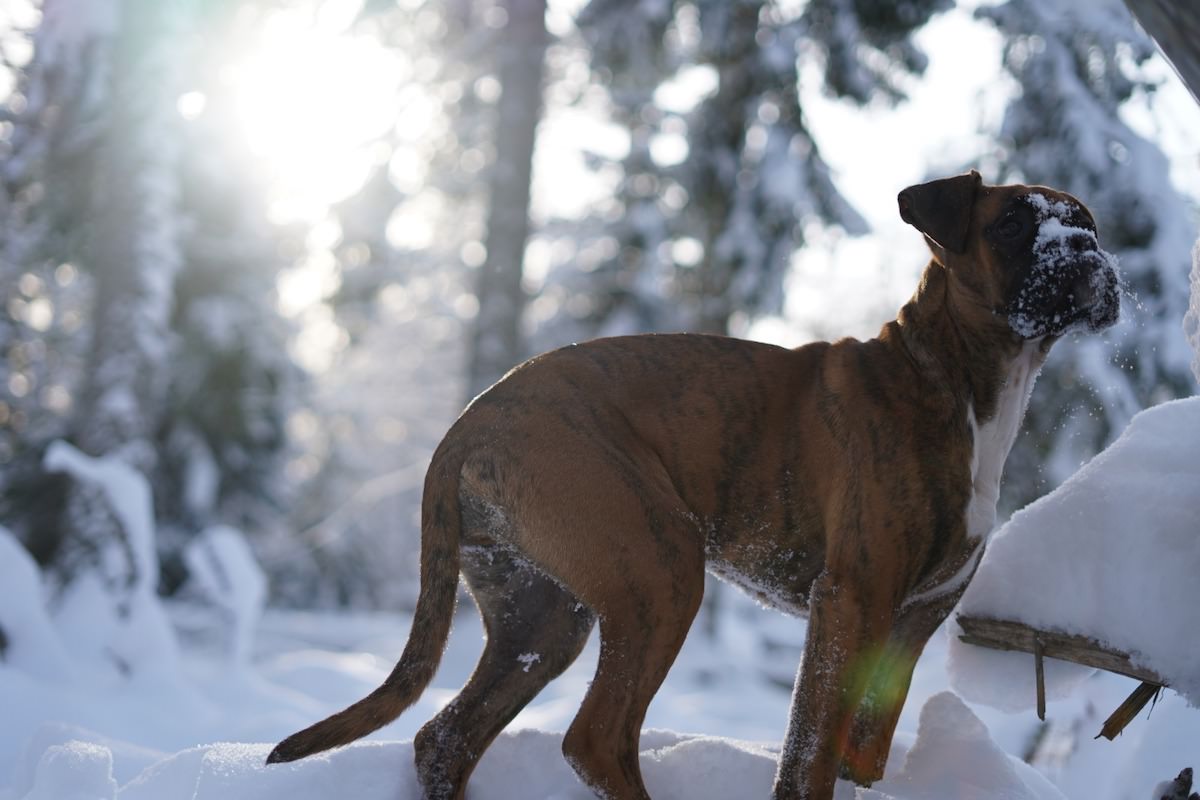 I'll let Freddie do the speaking.

'Well, yes. It did work out. We're here and live in a very small, quite alternative, sustainable community. There are a number of other tiny house and campervan dwellers nearby. We have a mains hook-up which mainly runs our fridge and access to running water so we can fill the 200l tank every 4 to 5 days. Everything else is powered by the solar and battery setup. We could switch to live completely off grid if needed, as everything is able to run off gas and from the battery if required, but we have really put down roots here.

We have a small plot of land out the front and a workshop in one of the barns just behind us, where I'm able to keep my tools and make anything we need. We have friends here and it's a lovely place to be." 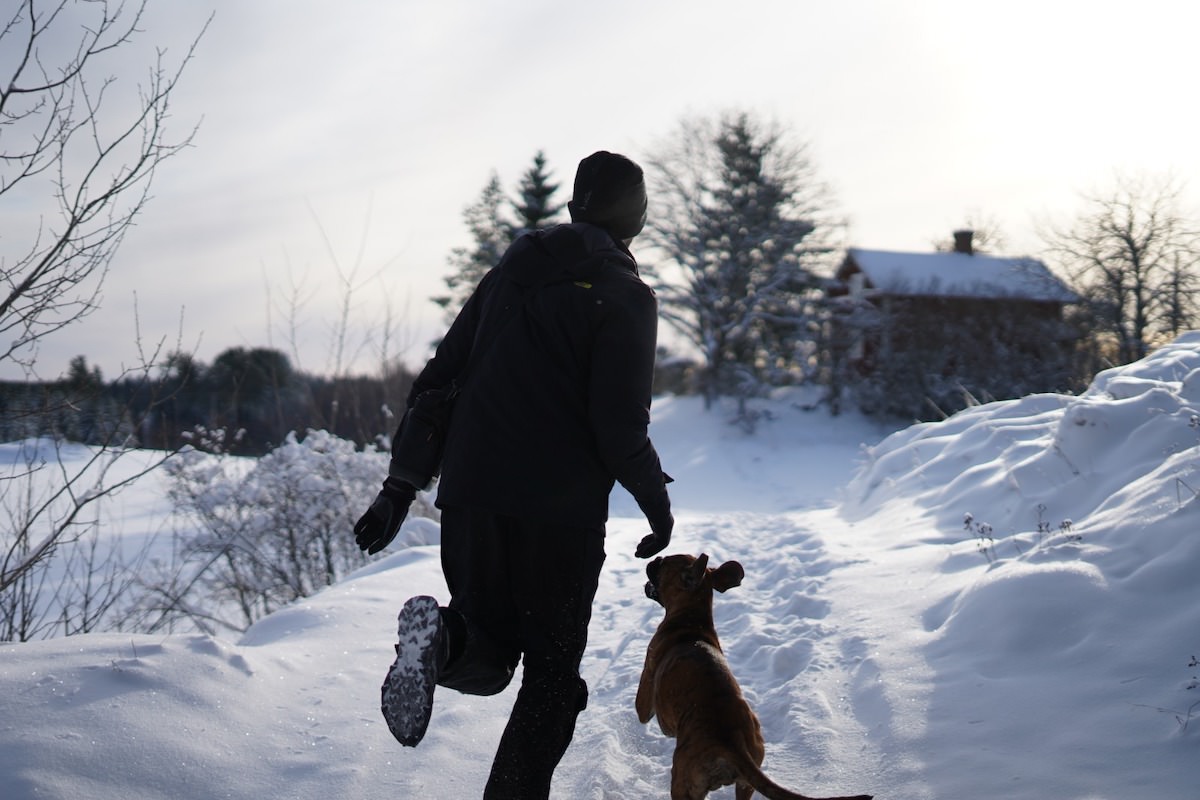 So is it where you started out?

"Well no. When we left Norfolk, in Summer 2019 we took four weeks to get to our first home in Sweden, which was near Gothenburg. We took a lovely leisurely route to get there via friends in Amsterdam, where we stopped for a week and then another week in Hamburg. We then got a ferry across from Germany to Gothenburg to get us to Sweden with minimal driving.

Being honest, we were trying to avoid any dual carriageways, as it did feel a little hairy at speed. When we first tested towing the tiny house in and around Norwich, it took a while to get the balance right, but we relocated a few of the heavier items and installed a stabiliser bar that dramatically improved things. We still felt more comfortable on the smaller roads. Plus it allowed us to see more of the countries we drove through by staying off the motorways. 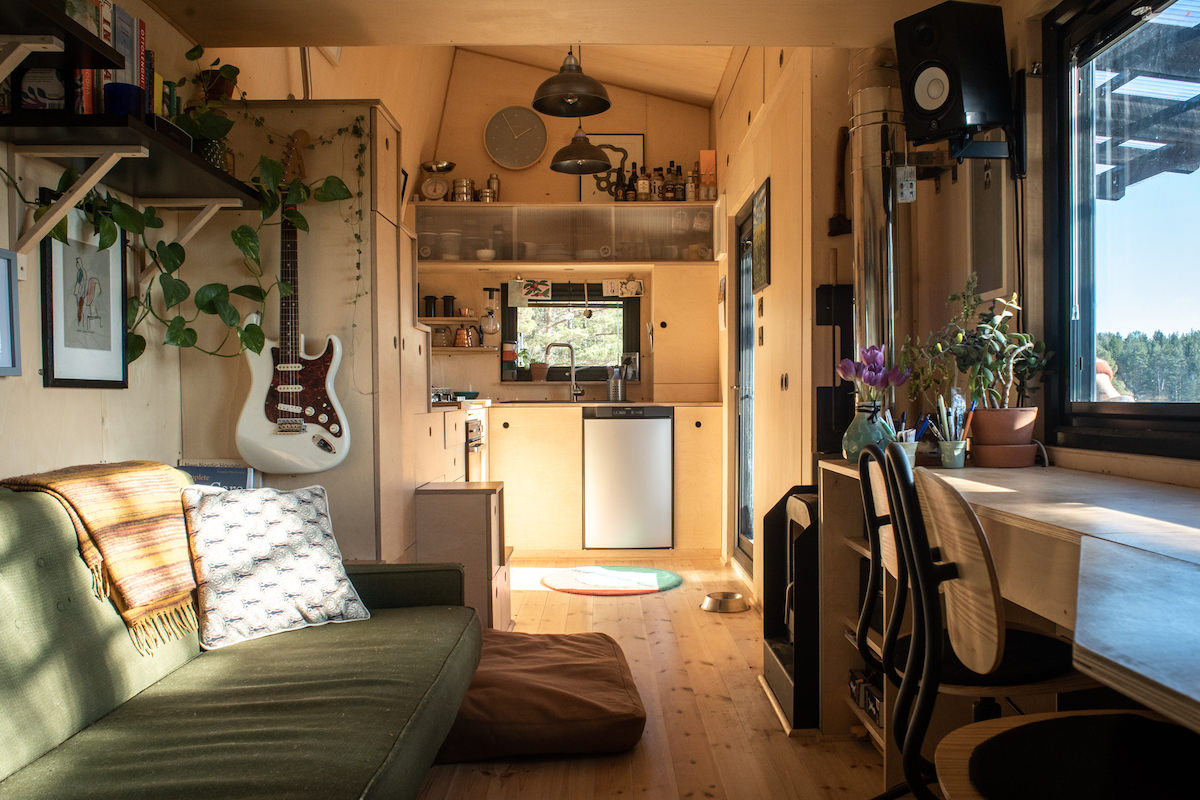 So, how is the tiny house to actually live in?

"Well, it's better than pretty much any of the houses and apartments we have rented over the years – by some way! We have a big kitchen, tons of storage space, great multi functional working/living spaces and it's warm and super cheap to run.

There's a communal cold store that we share with the farm for storing bulky items. It stays at a constant 8-10 degrees so works for fresh fruit and veg. This gives us even more space by not having to store that indoors.

We have a dual fuel gas/electric fridge which works perfectly and we use gas for the hot water and heating. There's a separate electric heater if we ever need it, but the wood burner churns out a steady heat all day and thanks to our extra efforts in the build to make sure we were well insulated, it holds the heat in winter and the cool in summer really well. The insulation is the equivalent of 150mm in a normal house, so it's up to the standards of a modern build." 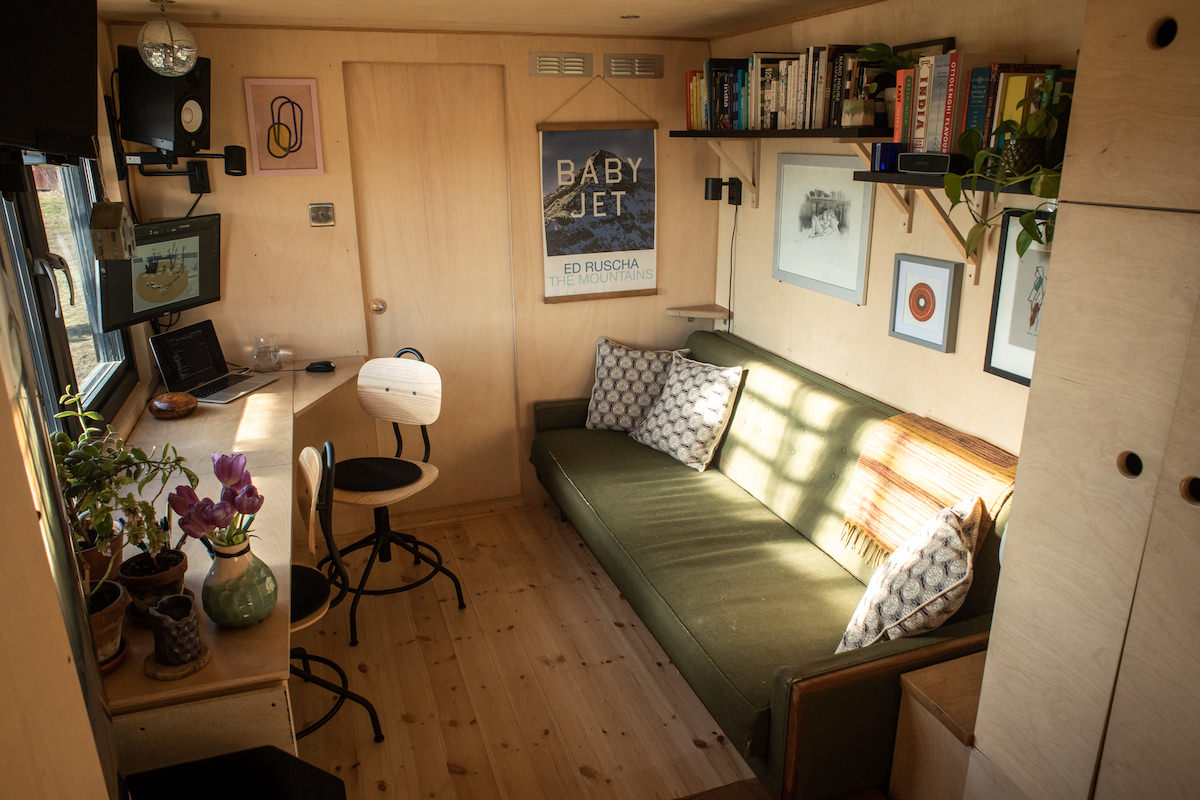 Surely it can't all be that idyllic?

It's definitely been a learning experience. There are a number of things we did slightly wrong in the build and have been able to put right since we have been living in it. There's some upkeep on the house, but to be honest we enjoy that. We have had a few frozen pipes where they were located near outlets. As we have gas installed, there's a legal requirement for holes in the floor to let carbon monoxide escape if the system becomes faulty and creates an excess. This does allow the elements in slightly when we have extreme weather but a couple of pillows stuffed around the pipes soon fixed that. The composting toilet also has a 120mm vent to the outside too. That's a big area for heat loss so the bathroom can get a bit nippy. Although we installed an electric towel rail so with electric hookup and with the bathroom being pretty small we can keep it warm without using too much electricity.

All of these things are part of the process though, part of our discovery and the fun in creating your own home from scratch and then driving it across a continent to live in a very cold, but beautiful country.

And finally - is it what you expected?

“Yes. In fact it's exceeded our expectations. We have our own home. That's a big thing. We're in a place we love. Jas works in Stockholm and speaks Swedish well and we have built our life together in a great place and are part of a lovely community.

We had initially thought we'd maybe move about more but turns out a tiny house is definitely not a caravan. It weighs 3.5 tonnes for a start. It's much more like a house, but a little smaller. Whilst we could move if we wanted to, there would be some work in getting everything inside the house ready to move.

You could look at it like an old fashioned computer/laptop or a very early mobile phone - ‘technically’ it's mobile but it's not just a case of hitching it on the back of the car and heading off into the sunset. But we're happy with that and we're very happy here.” 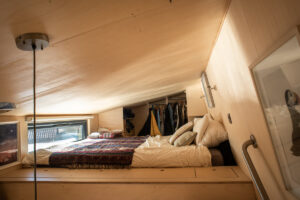 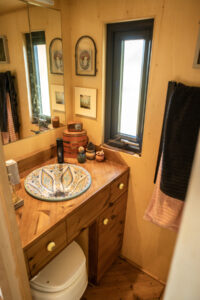