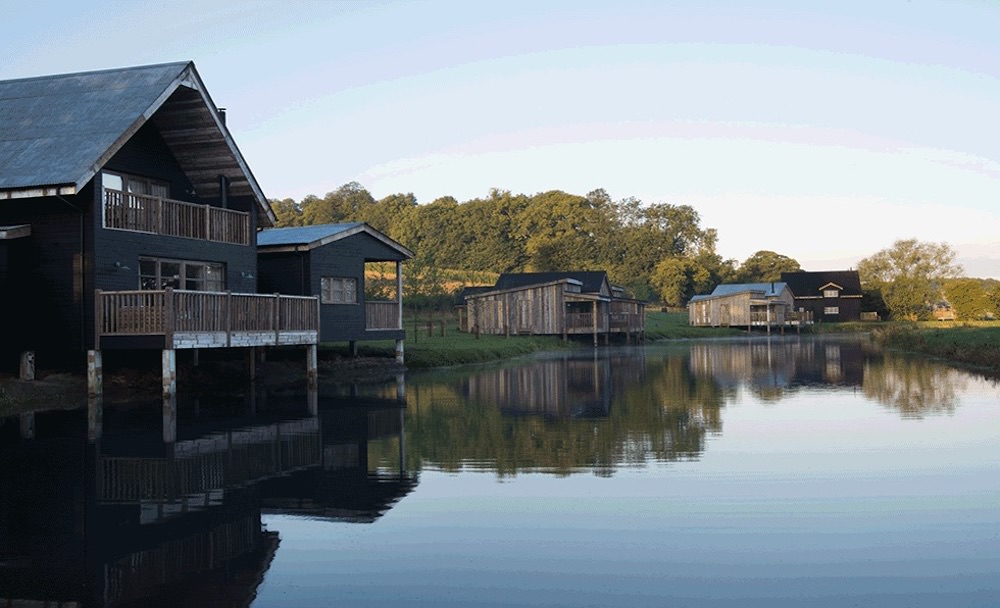 Soho Farmhouse is a unique members’ club and hotel set in 100 acres of beautiful Oxfordshire countryside. It is part of a global network of members houses with restaurants, workspaces, spas and myriad other spaces for meeting and for relaxation. Soho Farmhouse is a little different from the other Soho Houses, as its rural setting announces a focus on escapism and connecting with nature. Fittingly, Soho Farmhouse is more welcoming to families and children than some other spaces in the network.

Our brief was to build two bespoke play spaces for different age groups that sat well within the existing grounds and newly developed buildings that were under construction at the time. The space needed to provide children and guests with an area to play and explore the natural setting, all in close proximity to their relaxing parents. 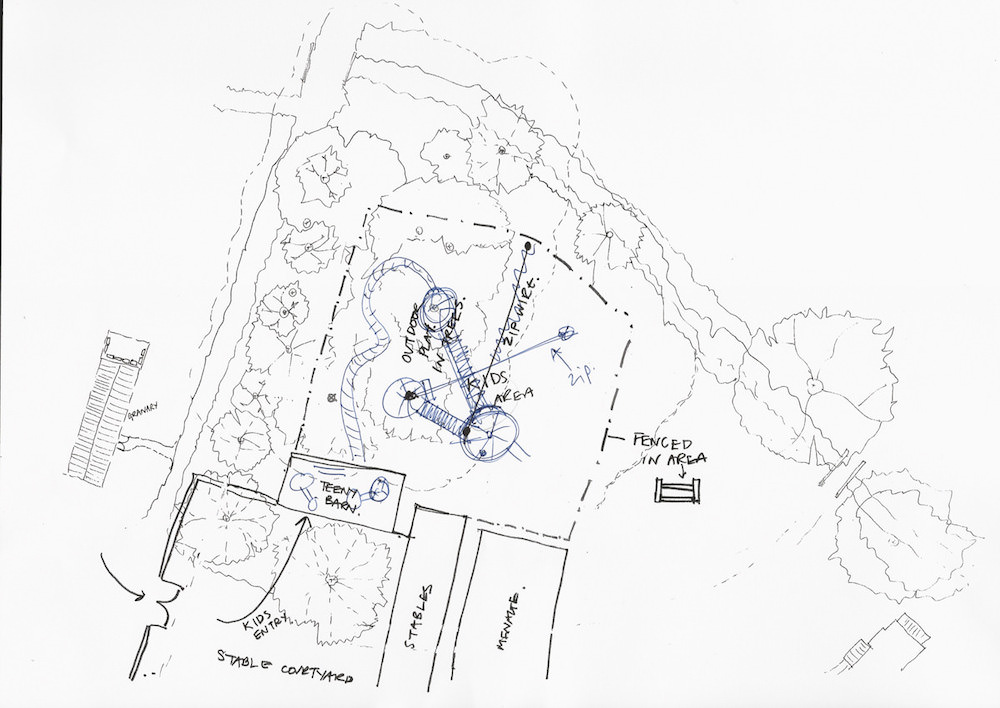 As the site and surrounding area had previously consisted of working farmland, many of the newly developed buildings and facilities were designed in reference to barns and other agricultural features, including the luxury cabins and the restaurants, bars and spa facilities. The aesthetic and sense of scale which featured across the buildings was rustic and handcrafted, to create a distinct and unique sense of place which spoke of traditional methods.

The design for the adventure play followed these cues, using rustic materials including recycled timber cladding. CAP.Co’s approach to designing bespoke handcrafted structures for each project, and our standards of quality in the finish details of the build were therefore a perfect match to the brief.

The design created adventure play across two spaces. The first of these was the Teeny Barn, which was to cater to Under 5s. The second and larger play zone was situated in the nearby woodland, and was designed for older children who could scramble and play through the trees, without going out of sight of parents relaxing nearby. 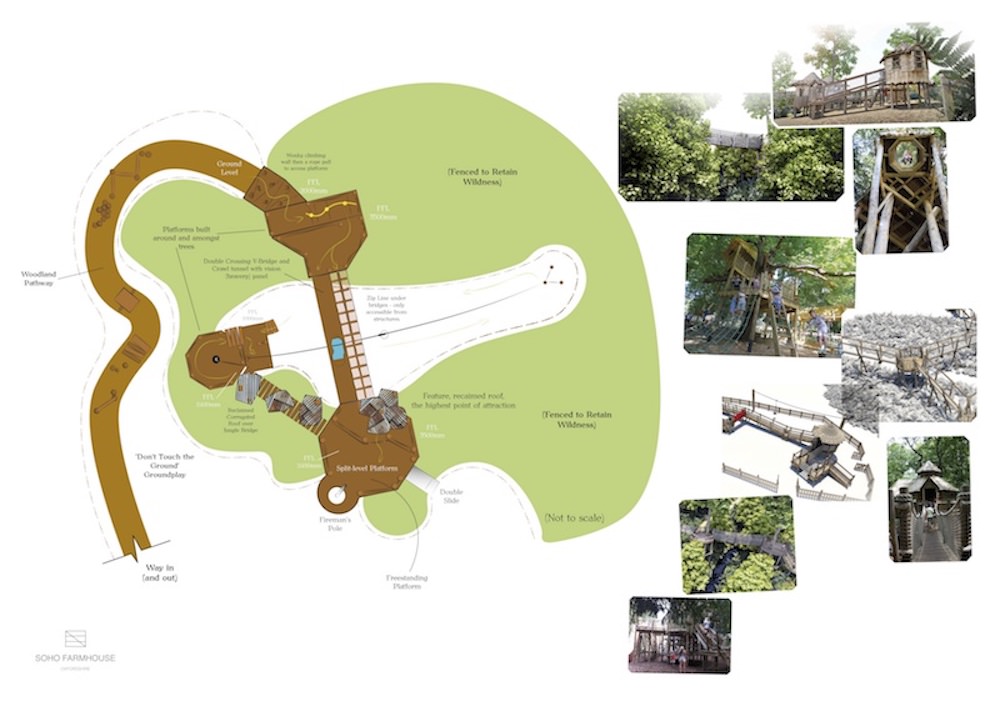 The final design of the Wild Wood area comprised lookout towers, zip wire and raised woodland walkways connected by bridges and ground play. The use of reclaimed materials gave a softened aesthetic to the new play structures, ensuring that they sat well in the rural landscape. The surrounding woodland was fenced in part to preserve its wildness, and to make sure that adventurers felt the sense of clambering and exploring high amongst the trees. 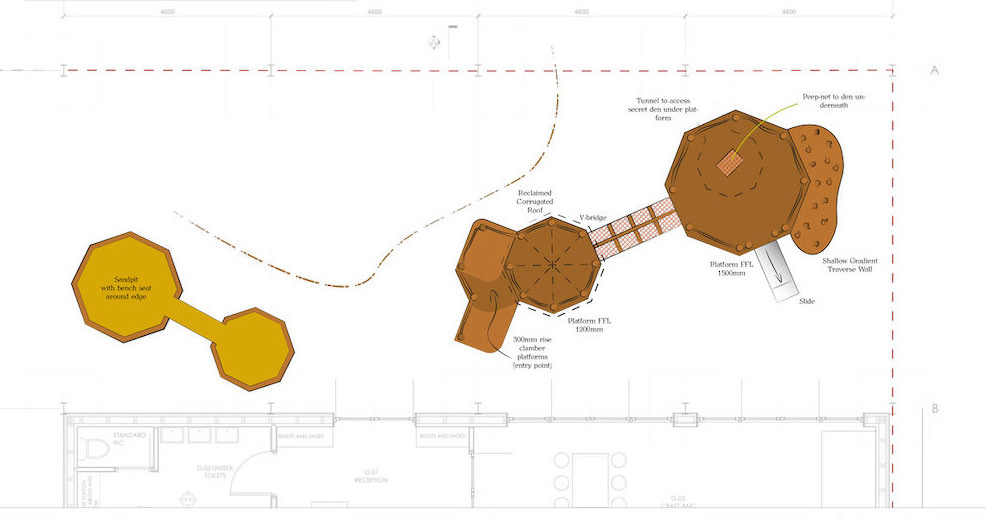 The final design for the Teeny Barn play consisted of rustic timber play elements including a slide and lookout tower connected by a bridge, nestled under the shelter of an open-sided barn. The completed adventure play balances use of natural materials with a sophisticated finish. 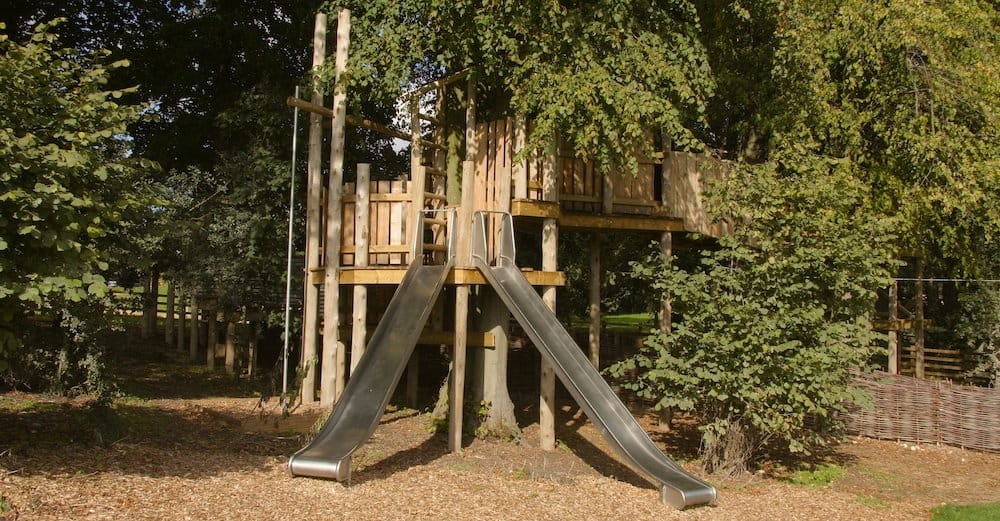 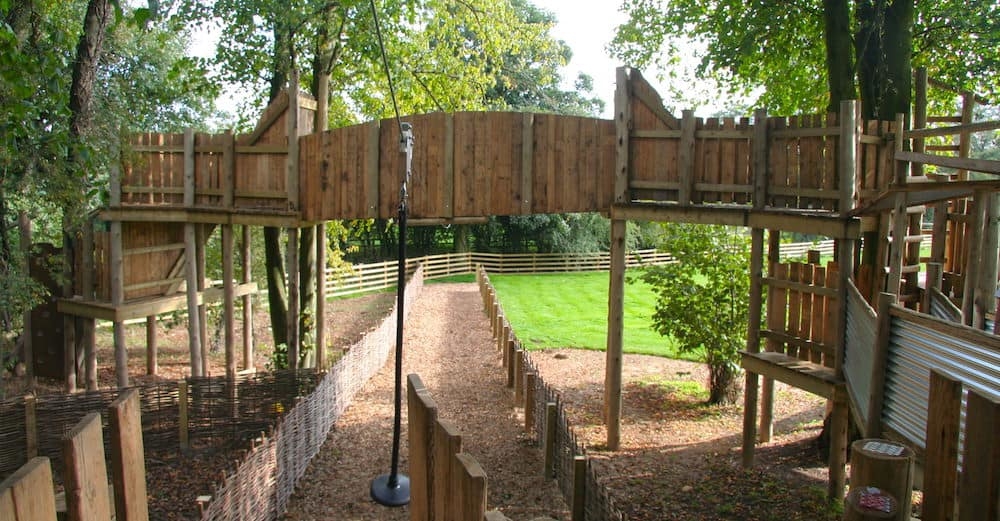 The zipwire in the adventure play at soho farmhouse

The zipwire in the adventure play area 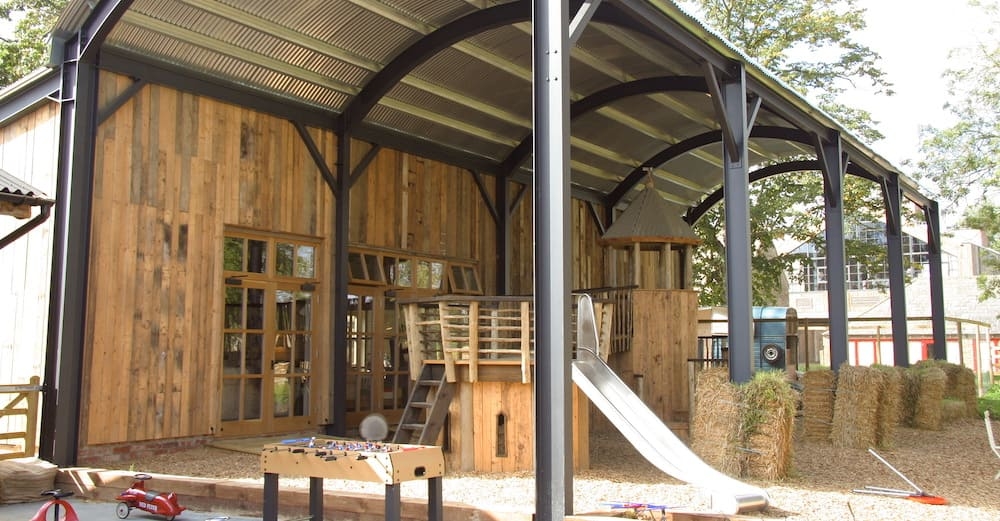 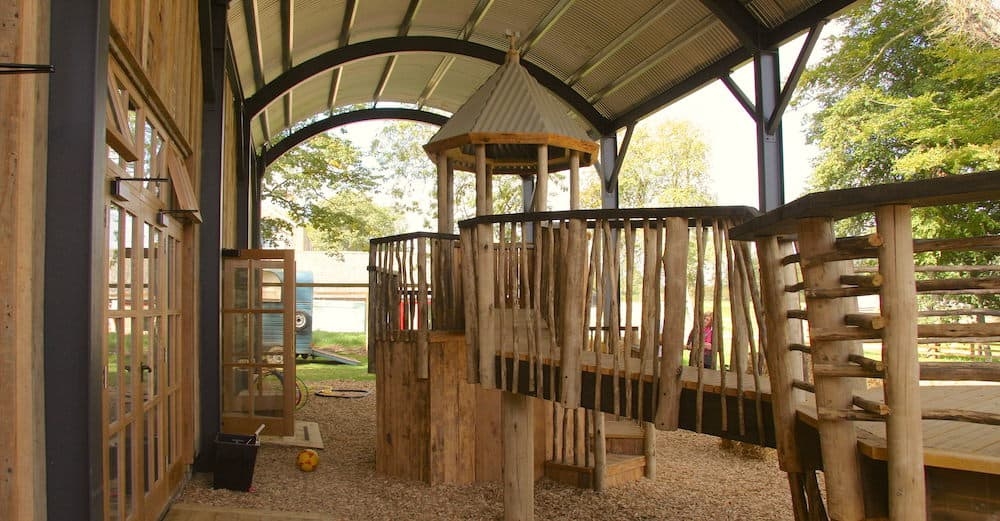 Close up of the Soho Farmhouse barn play

Close up of the Teenagers Play Barn

For more information about Soho Farmhouse, see their website. 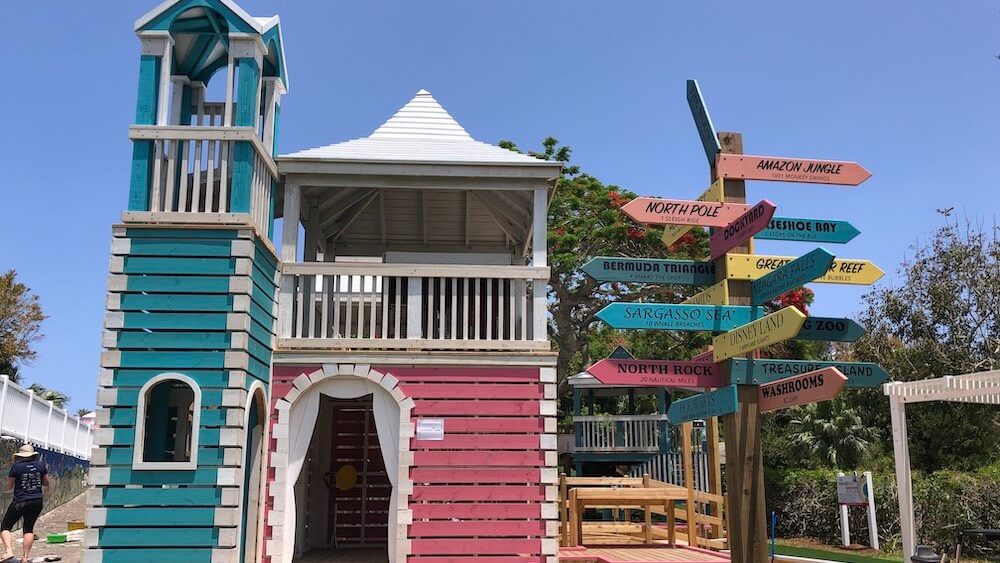 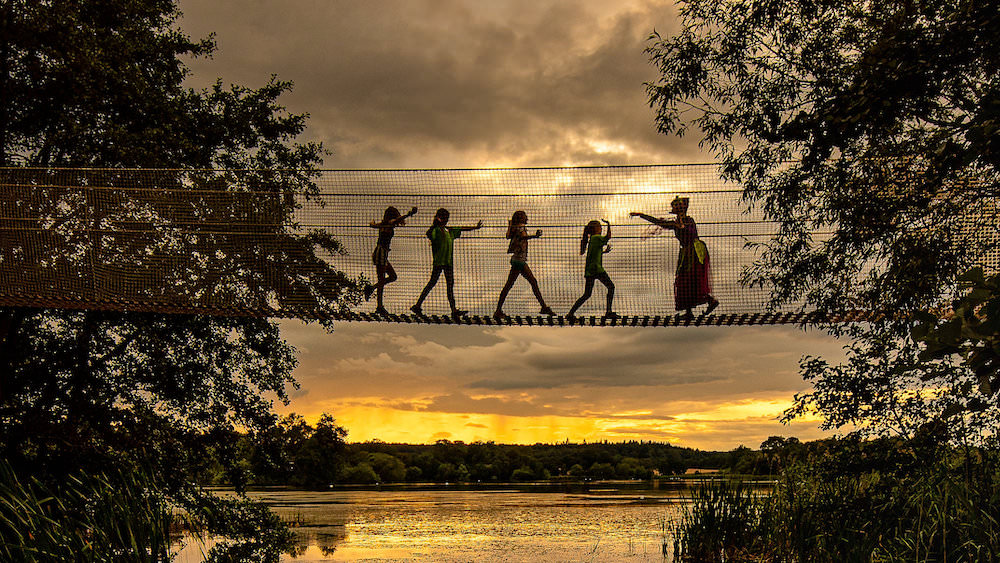